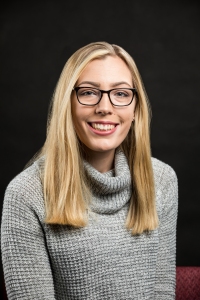 As a first-generation college student from Sheboygan, Karley Campbell was looking for a university that offered the best opportunities for her future along with financial aid assistance. Lakeland proved to offer that, and so much more.

“I’ve been so blessed with all of the generosity of Lakeland donors who really made my four-year education affordable,” said Karley, whose financial aid package also includes a Wisconsin Grant.

A graduate of a large public high school, Karley was drawn to the small student-to-instructor ratio Lakeland offers its students. As a double major in business administration and Spanish, with an emphasis in management and international business, she said it proves beneficial to have instructors with real-world experience.

“Our business professors here are amazing,” Karley said. “I think almost every one I’ve had has worked for a major employer in the area, and they are so knowledgeable and provide such good connections because of those work experiences.”

“When I went to Jess Lambrecht my sophomore year looking for an internship, she really helped me utilize all of Lakeland’s tools to find the best internship opportunities that matched my interests,” Karley said.

She ended up landing an internship with a Lakeland graduate at Above and Beyond Children’s Museum in Sheboygan. “I think it’s cool that all of the major programs do a good job of connecting current students with alums, which helps us see what life can be like after college,” Karley said.

Another thing that piqued Karley’s interest when coming to Lakeland was the study abroad program. This past summer, she spent a month in Costa Rica at the University of Costa Rica-San Jose.

Innovation Destination was another incredible experience Karley had through The Commons in Milwaukee. The 40-hour, four-state excursion took her and nine of her peers through five Kohl’s locations in Wisconsin, Illinois, Indiana, and Ohio. The experience proved to be beneficial as it provided networking opportunities and leads for post-graduation employment.

This summer, Karley will intern at Johnsonville. After graduation, she initially hopes to stay in the Sheboygan area to start her career, perhaps working for one of the family-owned, world-class companies that are pillars in Sheboygan County.

Through her internships, study abroad opportunities, and success as a student at Lakeland, Karley, just a junior, is already well-positioned to pursue other goals such as teaching English abroad.

“I want to be that person for future students who challenges them to achieve things they never thought they could, whether that’s passing a class, studying abroad, or just being able to attend college,” Karley said. “I want to inspire students to think differently and to believe in themselves.”